In 2011, I was at my bottom. I didn’t realize it at the time, but I do now. I was the unhealthiest I had ever been…and that says a lot. I had been unhealthy my whole life. I’ve been obese as long as I can remember. Always the big kid, the “fat funny friend” that could never successfully lose weight. 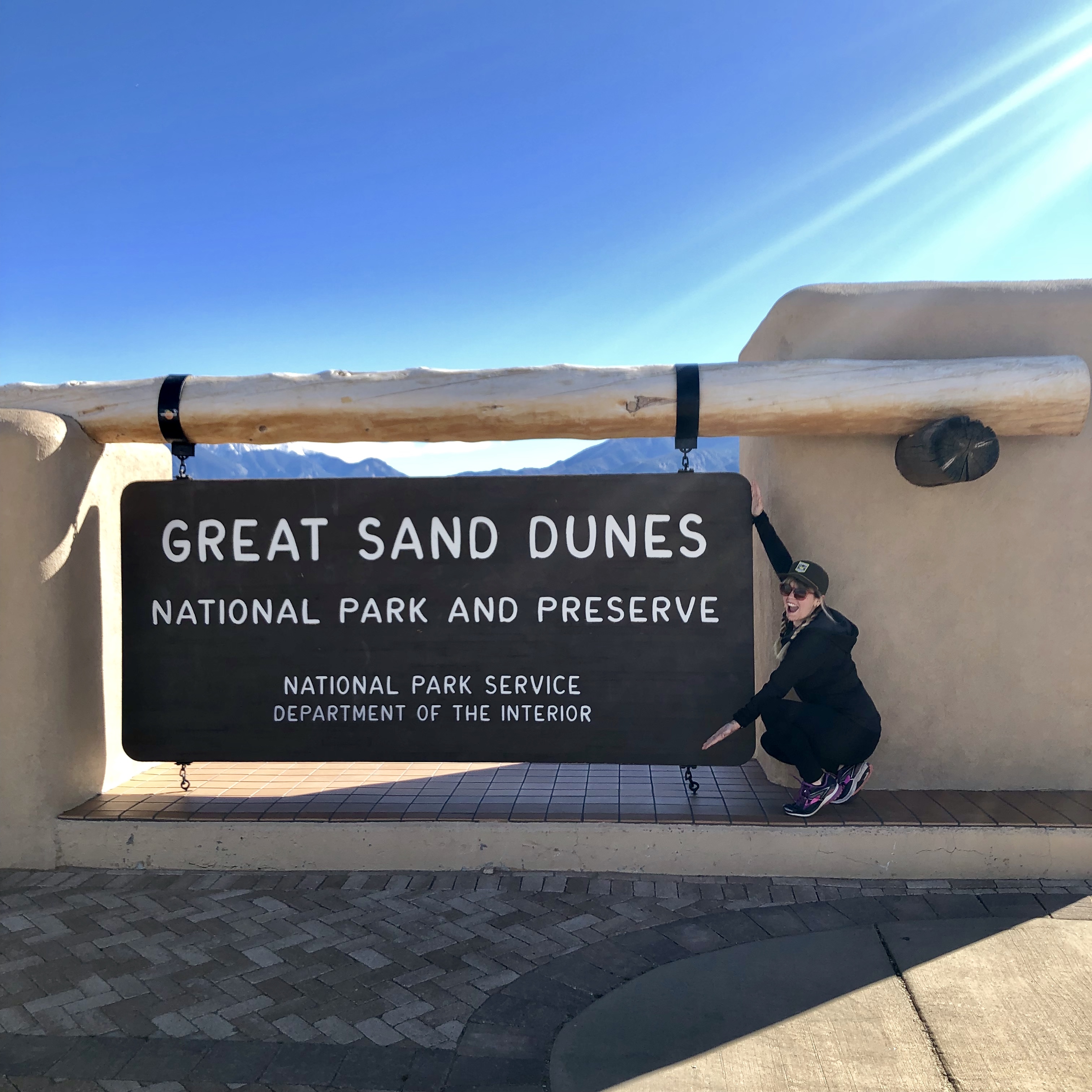 I yo-yo dieted for over a decade. But by 2011, I had pretty much given up. I was binge and secret eating almost every night. Hitting up several drive thrus at once, or ordering multiple pizzas for myself…then hiding all the trash so no one would know but me. Just me. Secretly living with my shame. At the time, I was living in Denver, and had learned about the Great Sand Dunes National Park. So cool! So, I made plans to go. All I wanted was to make it to the top of a dune to take some cool pictures of the 30+ miles of other dunes stretching in the distance. I didn’t make it. Well, I made it to the dunes, but I didn’t make it to the top. I made it less than half way. I had to stop every 10 feet or so because I was just too unhealthy. It was hard, and I gave up. I turned around and left. I don't have a picture of myself at the dunes (I wouldn't allow it at the time) but this is me, living in Denver at the start of my journey in 2012. 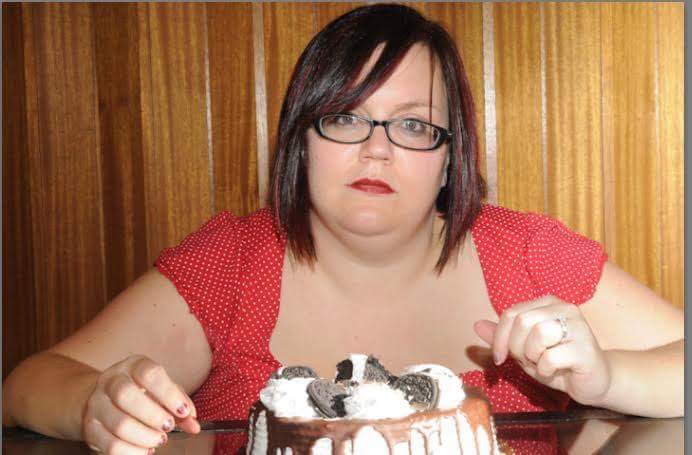 It wasn’t until months later that I made the decision that I had to change. I wasn’t living the life I wanted. I hated myself. I hated that I couldn’t do the things I really wanted to do with my life because I physically and mentally couldn’t. In January 2012, I made the decision to give up on my old life and dieting. My mantra was to make the best decision in every moment, and it changed my life. I started eating better, walking more, feeling energized. I started running, I started hiking, I finally could do the things I wanted. I moved away shortly after that, and never really thought I could return to the dunes and finish what I started. 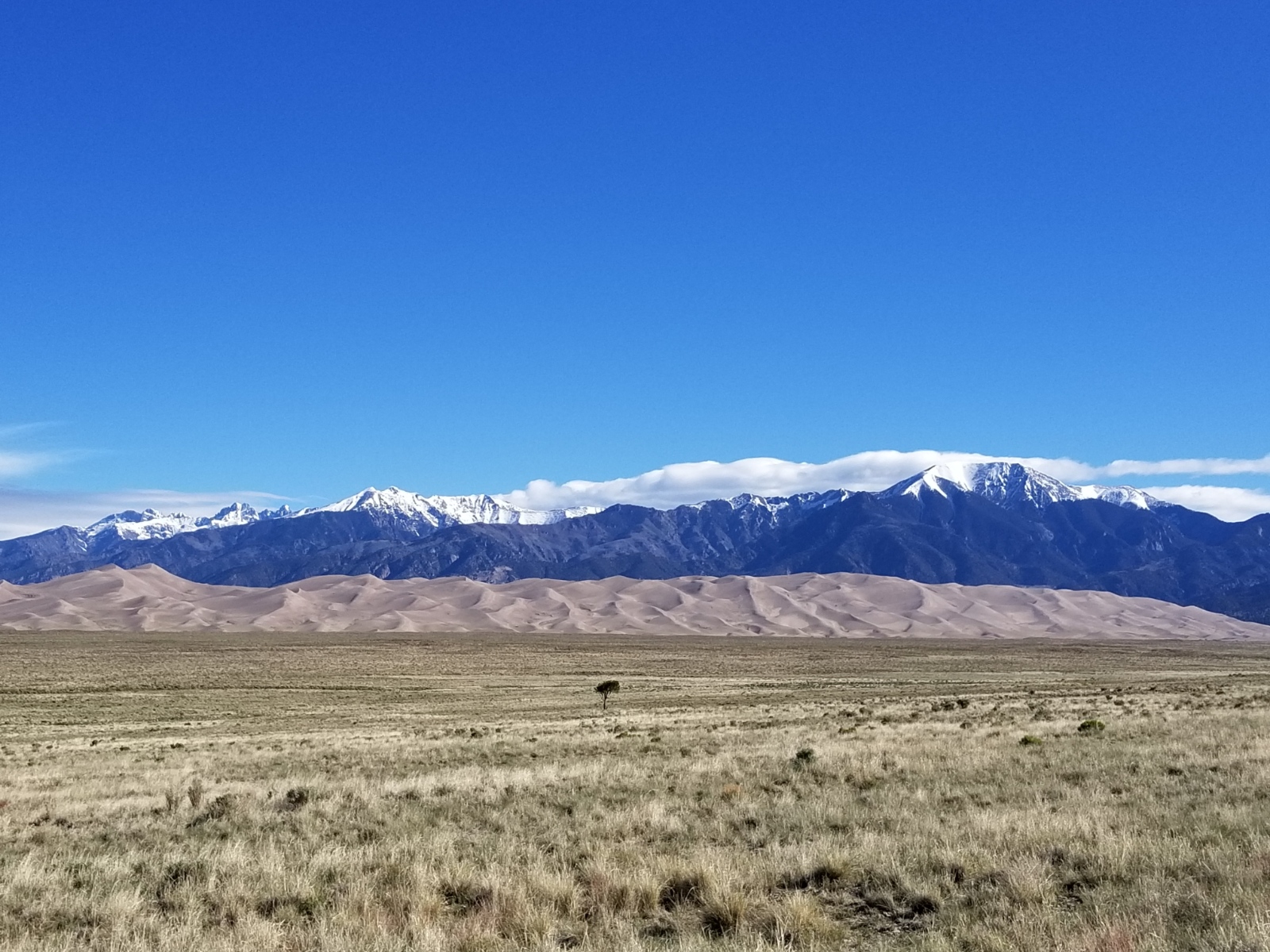 Fast forward to today, I’m down over 100 pounds. I’ve hiked all over the country and summited several mountains. I’m so passionate about my new lifestyle I started a podcast to help others on their journey. Through hearing so many people’s other inspirational stories and goals, it got me to thinking…I should go back and show those dunes who’s boss! It’s funny because I would never describe myself as a person now that would give up. But I would so easily give up in the past. I wanted to prove to myself that I could do it, that I’m not a person that gives up anymore. 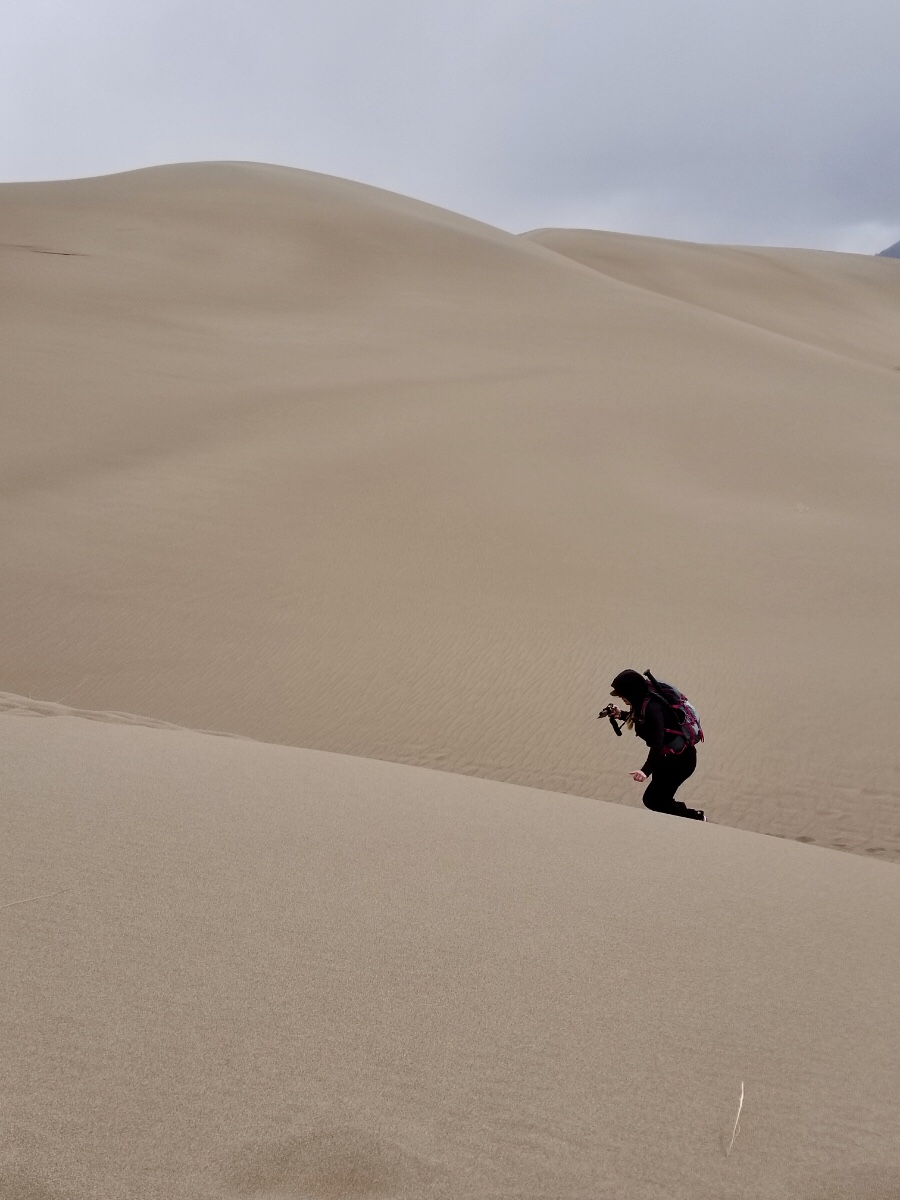 Not only would I make it to the top of high dune, I’d podcast at the top. No giving up this time. I booked an Air B&B in Crestone, CO…close enough to the dunes to start first thing in the morning. I wanted to give myself all day. I wanted to do it even if it took every hour of sunlight to finish it. I filled my pack with podcasting gear, and watched snow squalls blow in as we were getting ready to start. Can’t say I was excited about the snow and wind, but it just makes me more of a badass…right?! My husband, Mike, friends Sami, Bradley and their baby Hank were also in for the adventure. 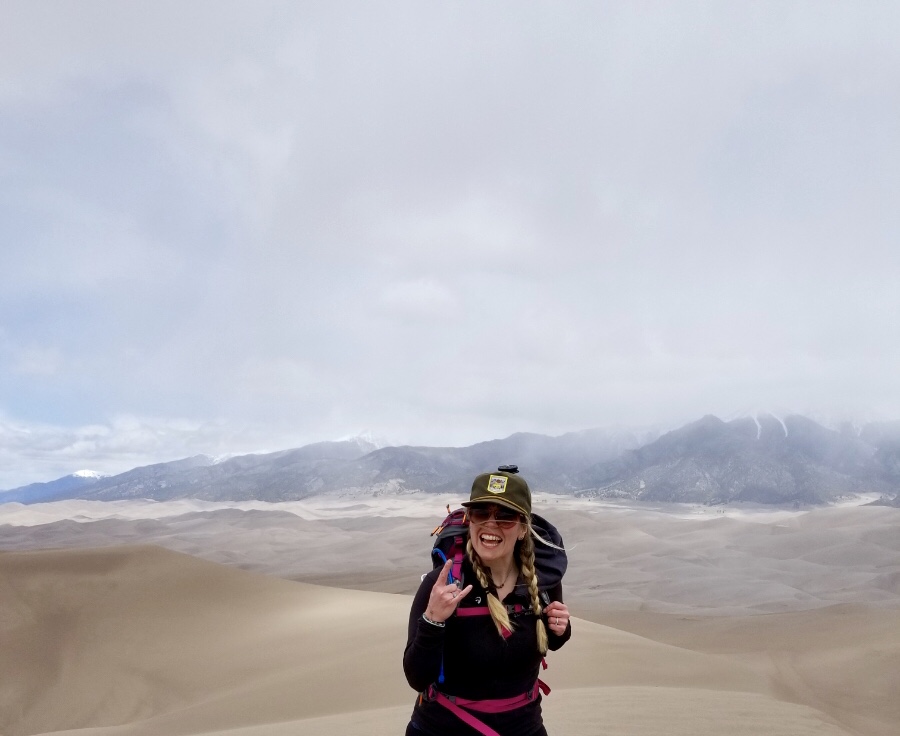 No excuses now, if a baby can make, so can I! I’m not gonna lie, it was difficult. Imagine running on the beach, but now make that beach vertical. Feet sinking in and sliding and your lungs burning not only from the climb, but from the high altitude. We had to stop several times to catch our breath and have water breaks. And it was somewhere around halfway that I totally understand why I quit. Turning around was tempting. But of course I didn’t. And guess what? I freaking made it! Here's me 3/4 of the way up… 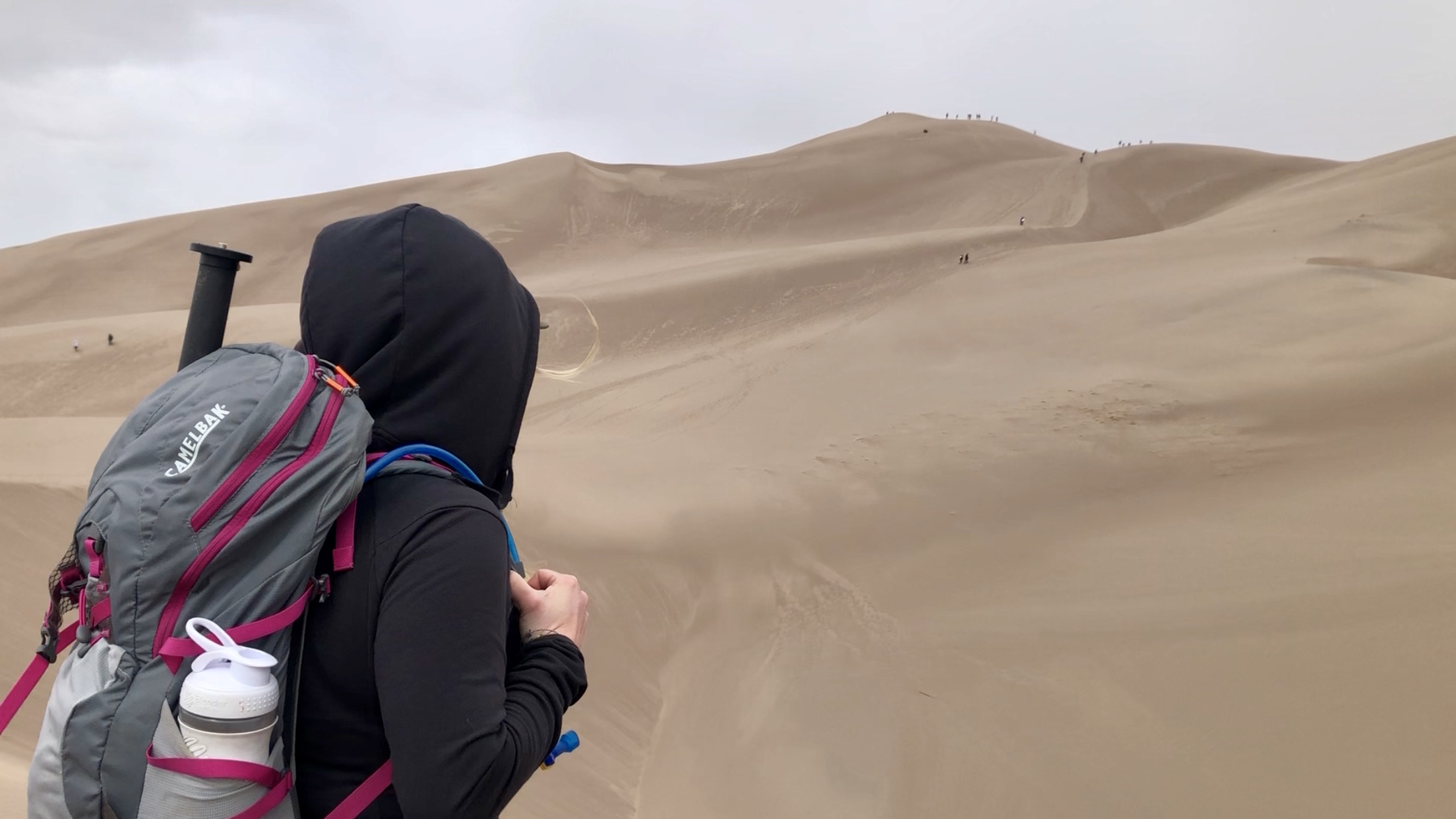 Made it to the top of high dune in the snow, in the wind, and plopped right down to record my podcast. It may have taken me 8 years to hit this specific accomplishment, but that’s all part of the journey. Learning you need patience if you want lasting results. Anything worth doing is going to take time, hard work and dedication. Now that the dunes have been conquered, it’s time to set a new goal. Maybe a fourteener! Colorado, I’m not done with you yet! Listen to the podcast here: 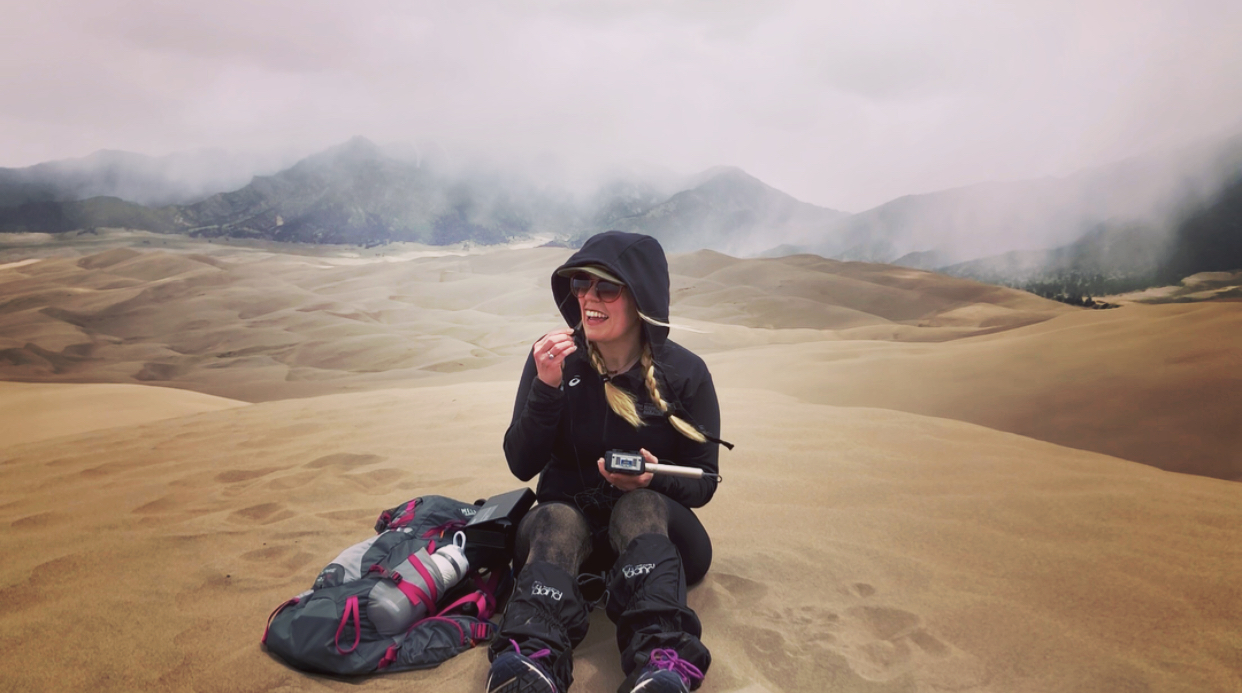